It looks like you are in the United States

We recommend that you view the Adam website that best suits your location as product information varies around the globe.

A Spirited Way to Use Scales in Distilleries

Before taking a sip of a cocktail, you’ve probably never stopped to consider the role weighing scales may have played in the creation of the spirits. Before we raise our glasses to toast our scales, let’s look at how distilleries utilize weighing equipment.

While scales can be used throughout the beverage industry (including breweries for beer), this blog will concentrate on the use of scales in distilleries, where spirits like bourbon, vodka and gin are created. What exactly are spirits?

Spirits are liquors that are usually 35 to 40 percent alcohol by volume (or, in the U.S., 70 to 80 proof) and don’t contain added sugar. By contrast, liquors with added sugar and flavorings are known as liqueurs. Non-distilled alcoholic products like beer and wine top out at about 20 percent alcohol by volume (beer averages about five percent, though craft beers are often much higher, and wine averages about 11 percent). 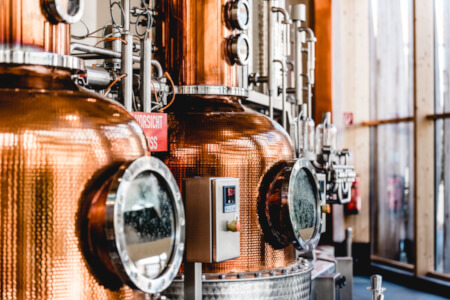 Distillation is a process of separating components from a liquid mixture by boiling and condensing it. To make spirits, the manufacturer begins with an already fermented beverage as its base. Whiskey, for example, uses a base very similar to beer (minus the hops), which itself is made by fermenting different grains. In the case of whiskey, the grains used depend on the style of whiskey being produced, including Bourbon, Scotch and Irish Whiskey. Gin is also produced using grain-based alcohol, while vodka may be potato-based, grain-based or even fruit-based.

The base is first created as a “mash,” which is then fermented using yeast. The resulting base alcohol is then transferred to a still. A still consists of the retort, which heats the liquid to a low temperature to vaporize it; the condenser; and the receiver, which collects the condensation or “distillate” at the end of the process. The distillate has a much higher alcohol content than the base and multiple distillations may be performed, depending on the particular spirit.

Following the distillation process, a spirit may be aged in a cask, bottled immediately, filtered or blended with another to create a specific flavor profile.

What Kind of Scale is Best for Distilleries?

How are scales used by distilleries? Well, they’re actually used at every step of the process, starting with weighing ingredients to ensure the taste is consistent, so a variety of scales would be needed.

Many gin distillers add botanicals to enhance their flavor. Whether distilling in large batches or small, craft-style batches, a compact balance like Adam’s Highland would be ideal to weigh ingredients that are used in small quantities. 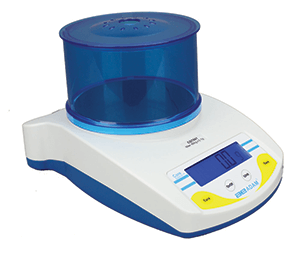 For weighing bulk ingredients like grains or for weighing barrels of finished product, floor scales and platform scales can be helpful. For wet, messy ingredients, washdown scales ensure accurate weighing results while holding up against dirt and water.

Because bags of grains tend to be large and unwieldy, a floor scale with a separate indicator like CPWplus may be the best option. The versatile CPWplus range includes models like the CPWplus P version with a pillar-mounted display, the CPWplus M or CPWplus L with medium and large platforms, and the CPWplus W with handlebars and wheels.

A legal-for-trade checkweighing scale can be used for batching to ensure that bottles are filled with the correct volume of finished spirits.

When moving cases of filled bottles in a warehouse prior to distribution, use a pallet truck scale.

To help select the right sale for your distillery needs, contact us and our staff will be happy to assist you. Ready to buy? Click here for a quote request and to be referred to an authorized Adam Equipment dealer.

How would you rate this article?